Mesages of hope and peace 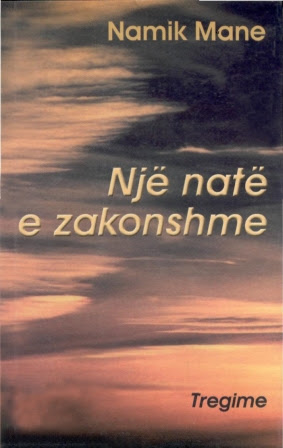 The writer Namik Mane (born in Filat Of Chameria in 13 March 1942) after the publication of the poem book “Filled with tears” (Pjergulla a lotëve), comes in front of the reader with the summaries of stories “An ordinary night” (Një natë e zakonshme). Social themes and issues prevail in the stories of this book.Thus, the author appears to us as the spokesman of the time he lived, brings it artistically reflected, with love and pain, that characterizes potential creators. The stories are an autobiography of the author and a biography of his contemporaries through the years. They distinguish for a realistic display of life, for truthfully and poetic breath, in the events presentation, in their subjective intuitive knitting, in the discovery of the character’s relatioship and in their carving with vivid and prominent lines that made the reader to remember most of these characters.
Through conversational style, without invention, fiction, tricks and artificial. Namik creates a short prose, that is fluently read, arouse the reader’s interest and curiosity on how social relationship are interwined, quite often strained, of vicissitude, surprises of life and the influence of today policy on the author’s spiritual world and the people who sorround.
Namik Mane, contemporary, close friend and friends in letters, of the desident known writer Bilal Xhaferri, is appeared in the Albanian press with hist first creativities in poem and in short prose since ’60. His name in those years, was in the rows of creators like: Bedri Myftari, Bardhyl Agasi, Moikom Zeqo etc, however for the fact that he came from a Chameria tribe, economically powerful, with patriotic and anticommunist traditions, time censorship abolished the right of publishment.
In these conditions, Namik Mane struggled a lot to survive, as a writer and along with real literary values, that his pen has taken out, sometimes for the sake of the publishment in the contemporary newspapers, he was also subjected to their demands for creativity with common themes of the day. This is seen in any story with the theme of the work, whose the author, aware of the weaknesses, has included in the book with the desire to give as full the time of dictatorship mirror, when he went for a couple of years in exile in Hamalla of Durres ( a period beautifully described in the story “The third”), together with the known writer Bilal Xhaferri.
The book “An ordinary night” (Një natë e zakonshme) is a nice conversation of the author with the reader. The stories are written with a rich artistic language, short sentences, that express feeling and energy, popular phraseology, especially of Chameria region. It scar the fact that the author of this stories is a really formed and completed prose writer and what is the most important, now his creativity is at the peak of artistic maturity. There is no way not to recognize this phenomenon in the original conception of stories, in the manner of the subject disclosure, in drawing the characters up to the finding of special expressive details and minuteness which definitely add value to the stories of this summary. In this sense Namiku ranks of the best prose writer we have today, although his creativity is low and till now not so far rated as it deserves. His stories are distinguished for kindness and nobility, as the author own soul, but they simultaneously are a hope message for reconciliation and peace between people of all stratum regardless of religion, race and colour. (Carefully read the story “Grekia”, whose character the author describe with love, without even the slighest rancor, although as violently expelled from Chameria, could allow himself any negative emotional burden)
We wish the writer Namik Mane further successes in creativity and you dear reader, a good reading!