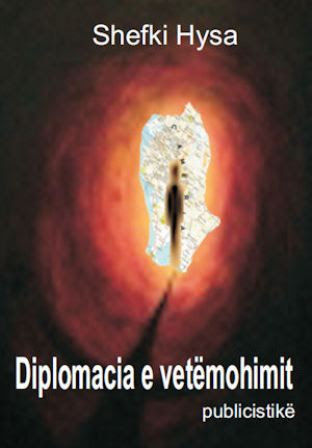 “Self-denial diplomacy”. This is how Shefki Hysa has called his latest book, which I read in the manuscript in a breath, not just by curiosity that his themes prompted, but rather from that sincere manner in which he gives the largest topic of the Cham issue. He surprises us, as in a random manner, speaking about Cham talent, for example Bilal Xhaferri, and his sad fate, he passes in political and historical essence as important as you say: wait, let’s return once again to this site to better understand what is showing and what has happened!
All the time I read the moving manuscript of Shefki Hysa, because he makes the descriptions even in a moving way, I remembered an early statement of Jean-Paul Sartre: countries are like people, each watches his interest… I do not remember in what context he said this, but now it doesn’t rip off my mind and, indeed, to the book in question, even in all treatments of the Cham issue, I noticed that only the Greek state was just as people and had seen his interest about the bitter fate of a minority dispatched from his country. Albanian state, as the yesterday one, the day before yesterday and as today’s one did not care for this fate and for this small non-national issues. Why?
Simply and clearly for the first reason that was and is a gamin state, comparable to that mendicant gathered handful who knows only to seek alms. It is clearly seen this small country in Shefki’s book; it is seen in those natural appearances of any efforts to raise the Cham issue in the ranks of interstate diplomacy, to formalize in a way that can be asked its choice clearly and appropriate. Because, up here where it is, it remains out of Greek protocol quite empty from a Cham issue.
This book that Shefki Hysa has prepared to publish is really handy and attractive. Without going into details of the former Cham persecution by the Greek chauvinists, the author passes easily from one description to another by spinning a shining and quite understandable yarn to anyone connected with an issue that is often deliberately introduced more complex. Thus, by some political episodes about this national problem, naturally you say to yourself: it’s ok for the Greeks, because they will see their interest, but what do we have that snuggle and dare not to mention them our own rights as well as a joke?
By reading this book, which not only informs within Albanian politics for the Cham “stalled” issue, but also provides genuine aesthetic pleasure with some beautiful descriptions of emotional states and different types of life, you understand and are convinced that this national issues, though last, will come a day when it will be resolved so natural, that you can be surprised how generations who fought so hard for that matter, had it so difficult…
So is the state, just as with people: when someone becomes stronger, the other makes route and politely smile…
At least, this thing, Shefki Hysa’s book will remind us one day when we are made strong.