”The rebellious” and “The sold paradise”

Notes about the poetic volume of the poet Dylbere Dika 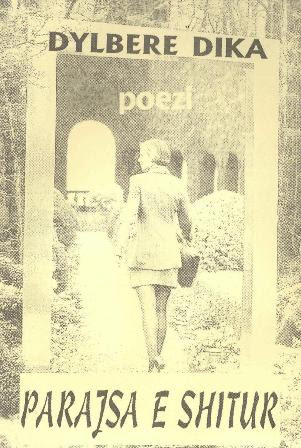 I had too much time without reading creativities of new writers and as soon as I read the first poetries of the new poet Dylbere Dika, from Sllova of Dibra, I felt a surprise within myself. I had secession from the everyday routine as a piece of lava is suddenly broken away by a silent volcano and I felt renewed. It seemed that I was covered by a special spring awakening and it was easily understood that the only reason if my renewal were that flock of flowers that she was bestowing me through her poetic volume “The sold paradise” (Parajsa e shitur), without being published yet. Dylberja, twenty two years old, (born on 4 September 1979), who just jumped the meadows of adolescence.

“And now you have not changed too much
You run as the colt without master through lawns and say:
The world is Jules and violence”…
So, as the character of verses, also the poet is even she, the compulsive adolescent, naughty child that prejudices and judges our world and is not lazy at all to call it also as the sold paradise, as rebellious as she feels by collisions with the iniquities of the life.
Rebellious poet! She was rebelled in her soul by the beauties of the life, which are property of the powerful people of this world, and prohibited apples for simple people. The simplest, the humans are only allowed to enjoy the beauties of the nature…
By right I feel sad too as the expressed in the verses:
“I travel by myself:
With the head among the hands,
With sorrow in the heart.
Death by right”…
Does the poet really wish death of the world?
No! Absolutely not! The human who sing for the creation of the earth Paradise, who creates by self how much he can, under the image of the great God, cannot agree with the death!
For this, Dylberja dreams and expresses in her poetries, this compulsive adolescent.
Let wish Dylbere good luck to pass the Rainbow of the desires and to be a great poet, like she dreams and to give to the humanity more beautiful creativity than her poetic volume “The sold paradise” (Parajsa e shitur) that you are taking in your hands, dear reader!