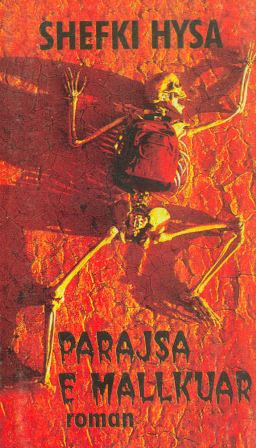 Shefki Hysa came in literature with the short prose, with the story and with the literary reportage like all writers. His characteristic was the vital juice that moved across the tissues of the prose’s live organism, organism that had nothing artificial, but it came true like the nature. This specialty attracted the readers’ attention and that of the literary circles and it raised the hope in the affirmed writer’s waiting. So, his short prose was first published in the literary press. It entered in the new writers’ anthologies and then it appeared in independent books. Necessarily, this was gladness for the new writer but, as it is said, after the gladness comes the sadness. When some ill-disposed people saw that his name started to excel through the media and books, they started to dig in his biography, to send anonymous letters and to insist in the national instances of the old-time regime for the blocking of his publication. Only some chances and special conditions saved Shefki from the stop of the publication. But as a proverb says, the evil sometimes has the good inside it. These vicissitudes and stories, one day, were converted in literary material.
Exactly in the new novel of Shefki Hysa “The Cursed Paradise” (Parajsa e Mallkuar), there are a lot of autobiographic pages, described sometimes with pain and sometimes with sarcasm and anger. This increases the dramatic intensity of the novel and holds upraise its tension although, some descriptions, where the tendency is open like in a tract, appear sometimes. And it is natural that the contemporary novel often leans to the essay and sometimes to the tract. When it is a right equilibrium between the narration and the essayist argumentation, then we have to do with a real prose. In the opposite, when this equilibrium is broken and the matter surrenders to the pamphleteer argumentation, then the prose is converted in journalism; meanwhile, when it leans to the narration, it is converted in a fairytale. The novel of Shefki has survived from this danger and an interesting creation, in idea as well as in architecture, has come out.
At first sight it seems as though the novel gives the life of a lost province among the mountains, a province with its events and its good and bad people, sweetheart and sadist, democrats’ soul and tyrants’ heart. But, if you think, quickly you will find out that the novel takes the characteristics of a symbolic work. An isolated place, where the wild laws of tyranny with all its mechanisms dominate completely, where the speaking and thinking freedom doesn’t exist and where the people live with anxiety and fear, is reflected in miniature. The image of Babeloku, who makes the law and decides about people’s destinies, is the incarnation of the tyrant. The author, putting this personage in usual and unusual situations, has escaped from the schemes of black and white treatment and has described a complex figure. Human sparks, with the view of traditional charity, appear to him in special cases.
But in a very natural way, these human sparks are given to the personage by the author to increase his authority. And it really seems as if the region’s people whisper: “Babeloku makes benefits too”. This is a very realized and interesting artistic discovery that reflects with verity an overlord’s figure through this provincial Babeloku.
The novel’s burden with episodes and with tragic destinies hasn’t extinguished people’s desire to live their life and the perspective light too. The desire of living and the perspective light are incarnated in the Jackie’s figure, in that of his friends and especially in the girls’ and women’s figures, which are described with the feeling of a nice lyric inspiration and with human love. All these are in contrast with the gloomy conditions, when the ululation of the wolves’ kennel with two feet is sometimes felt, but even directly with four legs. And here I should absolutely mention an unusual artistic fact. The author describes a valley with hungry wolves. Here, in snow time Babeloku used to get out of the car those who didn’t like, and he used to leave them in the midway. So they would finish in the wolves’ teeth. The author finishes the novel with this artistic fact full of dramatic tension.
“He was leaving me in his brave men’s hands. And it was still midnight. I was all shuddered and I was feeling that my heart was freezing by an inexplicable fear. Perhaps the forebodings were doing their job. I was trying to drive away my thoughts from the evil that was going to catch me, but the more I insisted the more clearly I was imaging myself in front of the wolves’ kennel.
They were going to stop the car in the middle of the meadow, to push me out of the cabin and then, they were going to draw back several tens meters to view with satisfaction the dreadful scenes. Being alone in the meadow’s darkness, running or staying, it was the same. In few minutes, I would have been surrounded by the wolves. Those beasts were used to the meat of Babeloku’s enemies. I would feel the wolves’ grindings and roars and then, their teeth would have immediately bitten into along my body like a lot of knives. I would scream with all my forces by the pain but in few seconds the kennel would have ripped me and my sanguineous body’s parts wouldn’t feel anything… Oh my God! Help me God – I screamed with half voice as I realized that I was losing my feelings from the body’s weakness that the hemorrhage of the head’s hurt had caused me and also from the intensity of the neurosis that I was experiencing… My sight was disappearing quickly in the darkness… And my body was subsiding in darkness too… Darkness…”
It was really an avid artistic discovery.